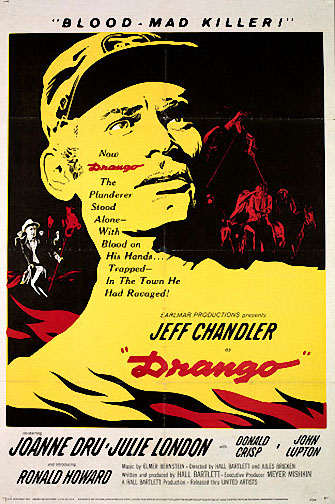 Drango (1957), a Union officer is made keeper of the peace in a Georgia town during the Reconstruction era. The title song, “Drango”, accompanies Major Clint Drango (Jeff Chandler) on his ride into town.

The march-like beat of the drums sets both an ominous and valiant tone for the film’s reluctant hero. Elmer Bernstein wrote the score for Drango including the music for the title song; lyrics were added by Alan Alch, and the song is performed by singing cowboy Rex Allen while Derroll Adams was backing on the banjo.

Bernstein’s score follows Major Drango through the story, underscoring every plot development from a military tune to a haunting funeral melody to a triumphant finale. But Bernstein was not the only musical talent associated with Drango. Interestingly, star Jeff Chandler was also quite the music man.

Composed and conducted by Elmer Bernstein between The Ten Commandments (1956) and Desire Under the Elms (1958) this Chandler’s production company, Earlmar Productions, starring Jeff Chandler, Julie London, and John Lupton was a somewhat depressing view of a ravaged Georgia town after the Civil War. Produced and directed by Hal Bartlett who is best known for Jonathan Livingston Seagull, the picture attracted little attention but the soundtrack was another matter. As we’ve discovered over the years there hasn’t been a style that Elmer couldn’t write for and not produce something of high quality.

The Rex Allen vocal was never included in the original record or any release but If you wish it is available on Rockabilly Records as a re-recording. [read more at The Internet Movie Database]