Allan Taylor - All Is One

Allan Taylor last CD (2013) “All is One”. One of the songs on the CD is “The Sky”, written by Derroll Adams, Allan’s old friend. It is a very beautiful version.

For 40 years Allan Taylor, born in Brighton in 1945, has been considered as the consummate performer, a writer of literary gracefulness whose troubadour chronicles encapsulate the realism of otherwise unsung heroes, otherwise uncharted lives. On previous albums Allan Taylor sang songs about the road, about all the different countries and all the hotel rooms.

All Is One goes deeper - into time and ultimately to the recognition that All Is One. A powerful philosophical statement delivered with virtuoso lightness. Someone who is approaching 70 and calls his album All Is One obviously has something to say. Taylor plays his favorite Martin guitars with the same sensitivity for body, expression and autonomy which one finds in his vocal performance - always moving, and never merely vague.

In the last song Allan Taylor summarizes: “I may not be the perfect man, I guess I’ll do the best I can” - and ends the album with the bemused lightness of a simple D-major chord.

Here is a link to an interview with Allan, talking about his last CD and also about Derroll: The Living Tradition 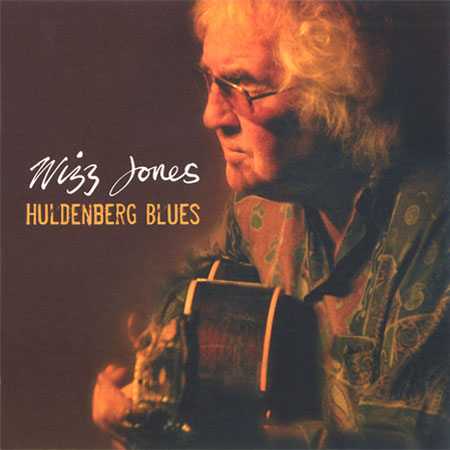 Over the years I’ve made several studio albums, mostly featuring other musicians and with very few completely solo tracks. At gigs I’m often asked if I have a live CD “like the stuff you did tonight”, and the answer has always been “no”… until now.

A few years ago I was touring in Europe when John Bacon, an English friend from the 1970s British folk club scene who now lives and works in Belgium, suggested staging an intimate gig at his house for a few friends and colleagues. It seemed like a good idea, as I hadn’t played in Brussels since the 70s.

Interest grew, and the well-known Belgian film-maker (and active UFOlogist!) Patrick Ferryn offered to film the proceedings and produce a private video as a souvenir. The evening was a great success, and there have been a few more such evenings since then. This, therefore, is a warts-and-all recording of a typical set, and I hope it captures the spontaneous atmosphere of my performances. My special thanks go to Patrick and, of course, to John and Ann Bacon, whose front room has become a most friendly, cosy and welcoming venue for me and other musicians over the years. 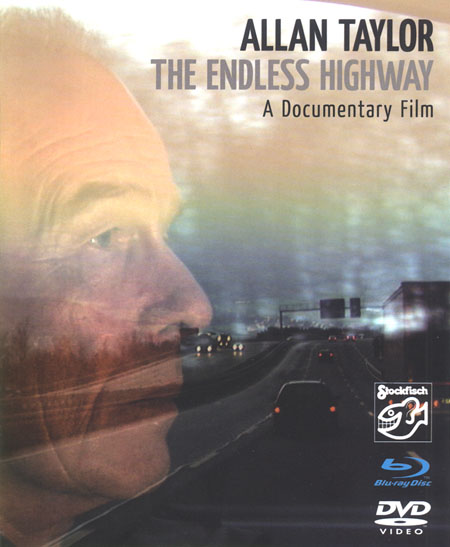 You think you are making a trip, but soon it is making you - or unmaking you. from: The Way of the World, Nicolas Bouvier’s beguiling travel book (a Switzerland’s answer to Jack Kerouac!

November 26th, 1999, an old cheap hotel near Notting Hill Gate, London. The whole film crew (I mean: Michel Baudour, Director of Photography, Richard Verthe, Sound Engineer, and yours truly) was awaiting for Allan Taylor. The previous day, we’d visited Ian Anderson (the Editor of FolkRoots Magazine) and Wizz Jones (the great British acoustic guitarist singer and bluesman), and videotaped them for a documentary film about the late Derroll Adams*.

As we suffered from a cruel lack of means and no real budget for the production, our only possibility to film Allan Taylor and Donovan, later in the same afternoon, was to fix an appointment at this improvised film set - actually the small bar of the hotel, amiably lent to us by its manager (the greenish vintage wallpaper was just terrible!). Allan showed up at 2 p.m. with his guitar, coming from Leeds by train. I’d just briefly met him for the first time some weeks before at a concert he gave in Oudenaarde, Belgium.

As Derroll was becoming real sick then, too tired to go on with the filming, I’d decided to see some of his long time road buddies and musician friends. Derroll and his wife Danny had given me a list of people to interview. Among the first names was Allan Taylor, who’d written "Banjo Man", an endearing song he’d dedicated to Derroll, one of his mentors. Now, I hang my Belgian face in shame and must confess that at the time Allan Taylor was totally unknown to me.

The Oudenaarde concert was an enlightened discovery; I was instantly affected by such an inspired singer-songwriter, fine poet and accomplished guitar player. It was crystal clear to me then that this guy had to be in the film, and so I asked him. “Alright, why don’t you call me later” answered Allan. So I did, and some time later the three of us, Michel, Richard and me, took the Shuttle from Brussels to London, with a rented camera, a minimum of light & sound equipment, and ended up in this popular hotel in Notting Hill.

Allan explained us how he’d met Derroll in 1971 and then performed his song "Banjo Man". Meeting with such talent, kindness and elegance was our reward. As we were ending the shooting I told Allan we were expecting Donovan who was supposed to arrive around 4 p.m. Allan had never met Donovan before and so he asked me if he could stay and wait for this old companion of Derroll, who had also dedicated to Derroll one of his most colourful and enchanting songs, “Epistle to Derrol”, a token of his affection and admiration for the banjoman with the tattoos on his hands.

As we were chatting, I glanced at Allan’s guitar on the rather worn carpet and asked him if he would agree to play for us one of the gems I’d heard in Oudenaarde - “Crazy Man” - which I found fantastic. “Sure”, was his reply. He immediately picked up his guitar and started to play. At this very moment, Michel, who had had a serious car accident during filming in Africa some weeks before, had left the place discreetly (he was suffering badly from pain in his back) and had gone to get some medicine from his room. Richard and I were listening attentively, completely immersed in the music. As the last note was played, Michel re-entered the bar. He’d missed the whole song and I felt so sorry for him. There’s nothing more delightful than sharing a good wine or a good meal, a good book, a good film, an interesting conversation, an art exhibition, whatever, with a friend.

Why not a magnificent song performed by a master song-writer? I always feel frustrated when one cannot share such a thrilling moment. I dared to ask Allan: “Allan, would you mind to play that song one more time for Michel?”. Half a nanosecond later he took his guitar and started again. This gives you the measure of the man. Simplicity, gracefulness and generosity are wonderful virtues I cherish above all others. These for sure belonged to our guest who complied with no hesitation at all. We were under the spell of Allan’s warm magic voice, impressive guitar playing and poetic lyrics which all of a sudden transformed the old-fashioned hotel bar in Notting Hill, making it a wonderful showcase for a most beautiful memory.

I was filled with the thought of making a film about this exceptional travelling troubadour, who had followed so faithfully in the tradition of his older peers and mentors such as Woody Guthrie, Tom Paxton, Alex Campbell and Derroll Adams. Unfortunately, I was then too busy and had to hold in check my enthusiasm. It took us another five years to complete and put the finishing touch to Derroll’s film, “I Was Born in Portland Town”. Meanwhile, dear Derroll passed away on 6th February 2000, in Antwerp.

In August 2002, Carsten Panduro, Director of the Tønder Folk Festival in Denmark, organized a memorable tribute concert to Derroll Adams which most of his musician friends attended; “Rambling” Jack Elliott, Arlo Guthrie, Happy Traum, Tucker Zimmerman, Donovan, Hans Theessink, Waterson/Carthy, Danny Thompson, Brian McNeill, Ron Kavana, Niels Hausgaard, Youra Marcus, John Sheahan & Barney McKenna (of the Dubliners) and Allan Taylor, of course. As things were going better then with the postproduction of the film, I was more able to envisage another project and slowly but surely the idea of making a film about Allan was taking root in my mind.

In the meantime we met again at various occasions, particularly in Tønder in August 2004 and discussed my ideas about this project. When the Derroll film was issued at last I sent Allan a video cassette as well as to all of those who had participated. Allan immediately dropped me a nice letter saying he would gladly work with me. Incidentally, at this time Allan had been approached by the American filmmaker, Jack Shea who wanted to make a documentary film about his life, but Jack unfortunately died in an accident shortly afterwards.

And then, as luck would have it, Günter Pauler of Stockfisch-Records (and Allan’s producer), said he would like to be involved in the production of a DVD film about Allan. And so, once more, with no money, no real production, but with good will and a team of good friends motivated by the strong desire to launch a new thrilling adventure, we started. Taking everyone’s wishes into account, and taking advantage of wherever Allan had a gig, be it in Belgium, France or Germany, we met up where we could. And once again I involved Michel Baudour, a huge music lover, who honoured us with his enthusiasm and creativity.

“Everything is autobiographical and everything is a portrait” stated Julian Freud. Yet, rather than a biography I was more interested in the process of how inspiration comes to the mind of a songwriter, and that was the method for this project. Each and every meeting was an experience, and it was a real gift working with great professionals like Allan and the Stockfisch crowd (including Sarah Rotter who shoot gorgeous images in Northeim). Not only was it a unique musical experience, but also it was a most re-warding and human journey. Thank you so much, Allan and Günter, for having given us the privilege to take a short walk “on the road” with you, on your endless highway. 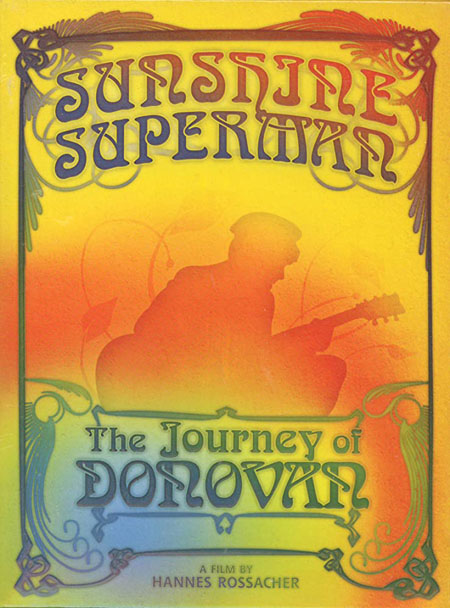 A 2 DVD set - Disc one contains the ‘Sunshine Superman’ (The Journey Of Donovan). The documentary that occupies disc one of this two-DVD set is alone almost as content-rich as any such commercially available retrospective for a major figure in rock history, skilfully combining interviews done specifically for this project with a wealth of vintage footage and photos. The main interview subject is Donovan himself, who talks onscreen so often that he almost functions as the film’s narrator, as well as its focus. Fortunately, Donovan’s a good storyteller who’s at ease in such situations, and he covers most of the main bases of his colourful career, from his modest boyhood upbringing and teenage beatnik adventures through international stardom as first a folk singer, then a folk-rock-psychedelic pioneer. As is the case with numerous similar documentaries, perhaps it might have been better to have some more space for other interviewees, although a few other key figures are heard from, including his wife Linda, his famed sidekick Gypsy Dave, and arranger John Cameron.

Disc two isn’t as lengthy, but while it has plenty of material, it’s really for the Donovan devotee, and not so much for general rock fans, most of whom will enjoy the first disc but have trouble sitting through everything on its companion. In addition to extended interview segments done for the principal feature, there are past and present music videos dating back to the ’60s; performances, done not long before the 2008 release of this DVD, of some unreleased songs; a couple mid-’60s TV appearances (a great Swedish live one of “Sunny Goodge Street” in 1966 but a disappointingly short one of “Catch the Wind” done the previous year); a couple songs from a BBC concert around the early ’70s; and quite a few live clips done not long before this DVD was made, among them a whopping 14-minute 2008 jam on “Season of the Witch”.