This Saturday, December 4th, we left Brussels to the Condroz region, in the province of Liège and more precisely in the direction of Poulseur. We had heard that a festival called “Les Anthinoises” was inviting us to celebrate the rebirth of life with rock and blues music. The committee of the “Anthinoises” wished during this weekend to revive the cultural life and to help the victims of the floods of July 2021.

On the road we were listening something to get us in the mood of the show, including an extract from the album “Chautauqua” with a duet between Tucker Zimmerman and BJ Scott. Further on, the song “John Muir Trail” that this Californian, who made his home here in 1970, has written for this same album.

Arriving on site in the Poulseur sports hall, we settle in the first rows while Tucker makes his last adjustments. It’s been a long time since we’ve seen him live and we're looking forward to seeing the man who wrote the beautiful lyrics of the song “Oregon” for Derroll Adams. He is joined on stage by his son Quanah on the guitar, Didier Bourguignon on the banjo and harmonica and Bernard Ronveaux on the bass.

Tucker Zimmerman is clearly delighted to be there, and delivers us former and last songs. We attend a beautiful complicity between the artist and his musicians. The concert ends on “Cat Man Doo Dan”. A song to warm up our hands and feet; “Jump down oh Lordy! Hop around hop around hop around oh Lordy! What dog? What dog?...”. On the impulse of this song, we order at the Foodtrucks; two hot dogs please!

After Tucker, we had the surprise to discover Sarah James Band. This singer of English origin carries us away on her rock, soul and blues music. She goes from one instrument to another, guitar, drums, and harmonica. That’s cool. We can't wait to see her again on another show.

Other musicians arrive to set up and balance. A man with a hat appears. He goes around the instruments, checks that everything is in working order and disappears like a magician. The man with the hat returns accompanied by his musicians. This is Elliott Murphy. It’s the first time we see him in a concert and we don’t really know what to expect. From the first notes, we have chills. The ballads of this New Yorker are accompanied on percussion, violin and voice by the gorgeous Melissa Cox and on guitar, voice by (the played angel) Olivier Durand. In the background, quietly inconspicuous but present, on drums and voice, Alan Fatras. What a wonderful symbiosis between the musicians, who were happy to be there for this last concert of the year.

Elliott ends his set with a new song “Hope”, created during the confining; “I See Hope in your Eyes”. We saw hope in your eyes, Elliott. Thank you for this beautiful performance... it was so good.

To close this festival, BJ and her musicians gave us a colourful and decibel-filled performance. Energetically generous, accompanied by Roberto Cimino on the guitar, Thierry Rombaux on the bass, Yves Baibay on the drum, as well as two young chorus members in great shape, the native of Alabama, sang her songs pieces by pieces.

After a very rocking performance, BJ invites us to close the doors of the castle, which is a metaphor for the closing of the 2021 concerts with the legendary “House of the Rising Sun”. As an encore, and to forget the slush and the snow outside, she takes us to “Le Sud” by inviting us to sing the lyrics of Nino Ferrer. 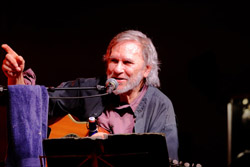 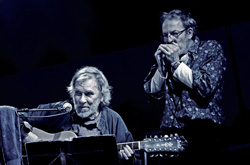 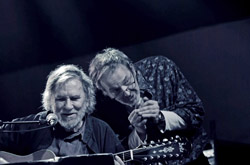 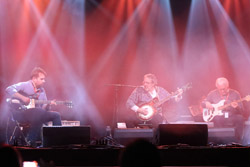 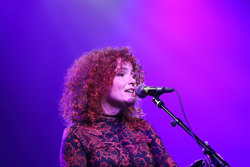 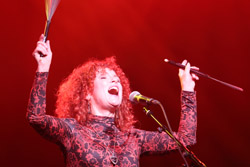 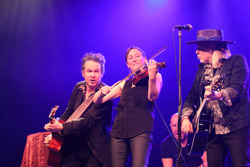 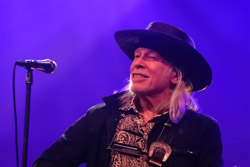 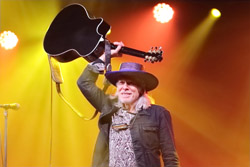 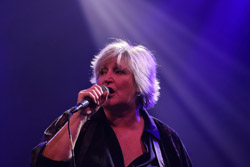 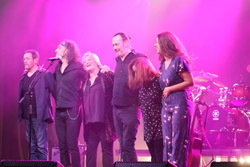 It is extraordinary that this show has brought together three American artists who have come to Europe (France and Belgium) and of different generations, the youngest of whom has collaborated musically with Tucker and Elliott at various times.

Another extraordinary fact and not the least, Tucker Zimmerman together with his travelling companion Didier Bourguignon, Elliott Murphy and BJ, had already shared a first time the stage for the special concert organized by Jean-Pierre Van Weyenbergh. It was on November 27, 1998, in Herent, in the honour of Derroll Adams’ 73rd birthday (Roland Van Campenhout, Guy Stroobant, Didier Courtmans, Vera Coomans and Norris Bennett also participated).

We could have dreamt of hearing the three American artists singing together on stage. Maybe a next time…
In any case, a big THANK YOU to the organizers for this beautiful show that definitely brought us out of this dark period through the magic of rock and blues.