My Tailor Is Rich 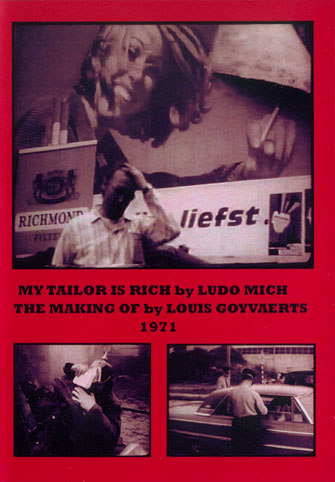 My Tailor Is Rich is an underground film by Ludo Mich after a one-act play by Werner Verstraeten. The film – now on DVD – was originally shot on 16mm in 1971. ‘My tailor is rich, but my English is poor’ is the first phrase of ‘L’Anglais sans peine’, an English method for French-speaking people written by Alphonse Chérel in 1929. Chérel’s method of acquiring English inspired Eugène Ionesco’s to write his absurdist debut ‘La Contatrice Chauve’ (The Bald Soprano) in 1950 and, no doubt, Ludo Mich refers to this particular play in the title of his own absurdist piece.

‘My Tailor Is Rich’ tells two tales simultaneously: one is about a father who – dressed in pyjamas – is trying to find his daughter Nicole in the alternative circles of 1971 Antwerp, and the other is about a mother who is looking for her son Heinz, who is seen wandering on an imaginary battlefield. To heighten the sense of absurdity and alienation, there is no chronological order of events and the scenes are all set in different spans of time, varying from Antwerp and Paris in 1971 to a WWI battlefield. The film switches from urban wastelands, contemporary young people hanging out, smoking and selling hash to killing, rape and looting on a battlefield. Derroll Adams, a folk singer from Portland Oregon who had found refuge in Antwerp as a draft dodger in the 1960s, wrote the music for the film and also played the role of “the folksinger”!. So do Guillaume Bijl, Jozef Hermans, Paula Van Belle and other fiends and artists. War and anti-war themes emerge from the non-linear story only to merge into a hallucinatory absurdist piece, beautifully filmed by Ludo Mich.

‘The Making of My Tailor Is Rich’, which is an interesting cinematographic document itself, was originally shot on Super-8 by Louis Goyvaerts during the filming of ‘My Tailor Is Rich’in 1971. The document was provided with a new soundtrack by The Joyous Cosmology in 2015. The Joyous Cosmology are Djuna (Keen) Michielsen, Nicolas De Clippele, Frank Vranckx and Maarten Tibos. The soundtrack was mixed by Mark Rietveld.